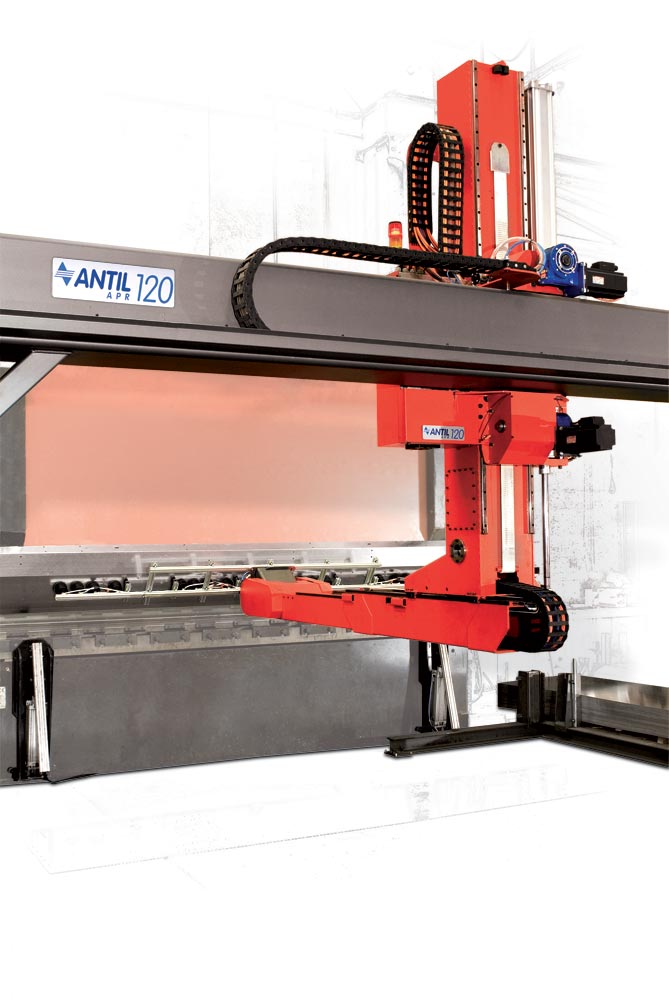 The APR Robot was born in 1995 in order to meet the need of having a bending robot that could carry out operations of automatic bending with traditional hydraulic presses: initially it was devised for pieces up to 50 Kg, over the years the models then developed allow to bend pieces up to to several hundred Kg, permitting works previously impossible.

The fundamental characteristic, born from the customer, has always been the possibility of working with the press both in automatic and manual mode, moving the robot itself. The specificity of the technique of bending with hydraulic press have imposed to design a robot that would follow the linear structure of the press, with 5 axes positioned in the space to be able to perform all of the bending operations as well as they are manually performed by the operator, including the overturning and tilting of the piece.

To produce an easy robot programming, the press was sensorized with appropriate transducers connected directly to the robot that allow the operator to not having to perform any adjustment to define the accuracy of the edge of the fold and the sheet tracking phase: transducers also allow you to constantly monitor the effectiveness of the bending process, reporting any anomalies and preventing the production of defective parts due to automation.
These particular devices and their method have been patented and covered internationally. The structure is composed of five axes: three linear and two polar
Of the three linear axes, one is horizontal and parallel to the table to ensure the maximum versatility of positioning in front of the bending stations and the placement outside the encumbrance during the manual use, the second is vertical to reach across the work area the maximum height of palletizing and the third is perpendicular to the press and allows maximum flexibility in positioning during the execution of the bending cycle.

The two polar axes of the wrist allow the handling and the taking of any piece in any position and in an elementary way, because they are oriented according to the two operations that the operator manually performs in front of the press, the reversal and the tilting of the piece. Another key feature is the management software (on the machine) which over the years has been constantly developed, reaching the final version of a simple programming really amazing for those who have not experienced: you can quickly learn and use, even for the operators who are not familiar with the computer.

–      The wrist with allow shaft, which allows to bring compressed air to the gripping tool, vacuum and electrical signals without the risk of shearing of the same by the moved piece.

–      The last robot arm which always remains horizontal, allowing to place the piece in the matrix supporting it from above and from below without ever having interference with the piece itself.

–     The linear axes that allow to position the APR arm always in the same way in front of any bending station enormously simplifying the programming.

–     The horizontal scrolling beam is raised allowing in all the operating area, the passage of forklift of average loads: the beam is thus “transparent” and it does not limit in any way the manual use.

In 2002 the cartesian robot line is completed by Twister, a column robot created to minimize the encumbrance of an automatic bending cell for light pieces: the entire bending cell occupies a space less than that the operator needs to manually work in front of the press. The design criteria and the simplicity of the application are identical to the tested APR line.

Finally, to complete the offer of bending robot with a product suitable for the bending of small to medium sized pieces with high productivity, during Lamiera 2012 was presented the new model APR 15 Silver, completely redesigned and made ​​with all-aluminum arms to make it lighter, faster, more powerful and compact. Customers who choose to use it in their production departments provide us great satisfaction.

This website collects statistical data on navigation through cookies installed by authorized third parties, respecting privacy of your personal data and in accordance with standards established by law. By continuing to browse this site, clicking on links in it or simply shaking the page down, you agree to the service and the same cookie.OkPrivacy Policy